Just finished racing the Loro Piana Superyacht Regatta in Porto Cervo Sardinia onboard the Wally Cento+ OPEN SEASON.  She is a Vrolijk designed 100 footer, later stretched to 107 feet.  Porto Cervo is absolutely one of my favorite places in the world to sail, so it was going to be a great week, no matter the results!  This was my first time racing with this team, but we had a couple short training sessions in Palma prior to the event, so were pretty well prepared as a crew.  The boat has not raced in over a year, and so this was a test event for the owner, with old sails, to help decide if he will do a proper campaign next year.

We were in the Performance class with about 12 boats.  Magic Carpet was going to be the benchmark for everyone, as she is a fully optimized and campaigned Wally Cento.  Sure enough, she sailed nearly perfect and easily won the event.  The battle was for 2nd, and this was between us and about 4 other boats.  Going into the final day the Briand 115 INUI held a 2 point lead over us, and unfortunately the final race was canceled when the wind died, so we finished third for the week.  But a great regatta, the team sailed really well, and we were satisfied with the outcome.

I’m now on my cat in Menorca for one day, and then it’s off to Palma to prepare for the first event of the season on TOPAZ.  This is the J Class that I will sail with for the remainder of the 2019 season.  This first event will be at the Superyacht Cup Palma, where we will have some great competition there to test ourselves against, including the other top J Class VELSHEDA.  Should be a great event. 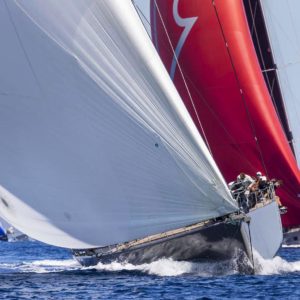